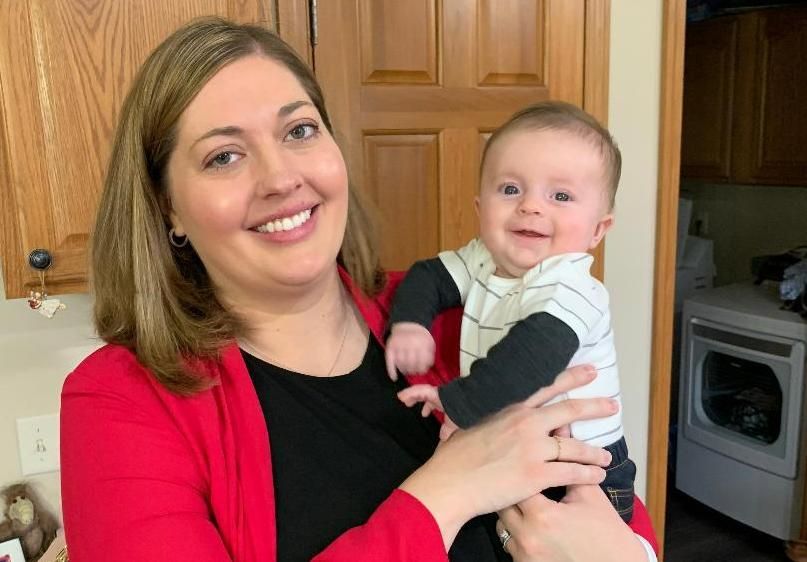 We had been married for a year and decided it was time to get off the pill and try to start a family. Seven months went by and nothing. No period and barely any smiley faces on the ovulation kits I was doing daily. I saw my OB and he told me in the office just based on symptoms that I had PCOS and was not ovulating. I would need tests to confirm this but needed to see a fertility specialist or reproductive endocrinologist to get pregnant. That was certainly a shock. Despite working in healthcare, I felt to be somewhat in denial knowing my body wasn’t doing what it was supposed to. I also felt shamed by my OB as he said, “why did you wait so long?” So long? I called the clinic that was recommended to me and set up a consult.

Fast forward 2.5 years and I had been through oral and injectable medications, IUIs, a surgery and was now being prepped for IVF. Each step I thought, this is it. This is how we will get pregnant. But each step didn’t work despite more invasive procedures and more meds. My first IVF round didn’t go as expected and resulted in a negative pregnancy test. We had to do another egg retrieval. This time I had one embryo that was transferred and I got pregnant. My husband and I were ecstatic! Finally, we made it! We were pregnant. Things were looking well, and I was discharged from my fertility clinic.

With a first trimester screening, the genetic counselor said I had a 1 in 8 chance that our baby had Down Syndrome. I sent off more blood work. I went for another ultrasound at 15 weeks and as soon as the tech started scanning, I saw that the baby wasn’t moving and there wasn’t a heartbeat. She quickly finished up and said she had to go get the doctor. I told my husband that the baby wasn’t alive. He didn’t really believe me. The doctor came in and confirmed our precious baby, our miracle, had died.

I called my OB’s office crying. The medication I took at home to prepare my body for the procedure actually put me in labor and I had our baby at home. I didn’t want to look at her, but we needed to bring the body into the OB to possibly confirm the cause of the miscarriage. That day was the most heartbreaking day of my life. The clinic called me and asked what we wanted done with the baby. We decided to have her cremated. We picked up her body and sat in my car in the parking lot of the hospital looking at our baby. So small yet so undeniably ours. We later found out she was a girl and named her Lily. Her beautiful urn still sits in our bedroom and we planted a tree you can see outside our window.

After my miscarriage, my husband and I knew we wanted to continue trying. I didn’t know how to move forward. I felt so incredibly empty and broken. I knew I needed to take some time off to heal and grieve. I was in the darkest place in my life and I didn’t know how to get out of it. I didn’t want to see friends or family, I felt like I had somewhat failed as most people close to us knew we were pregnant. I knew we had to also crush their dreams also and the hurt that would entail. It was a loss for everyone who knew.

I later came across information on an infertility conference hosted by Resolve in Minneapolis. I begged my husband to go together and he eventually agreed. I met Pradeepa in Minneapolis. In the folder I got there was a pamphlet for an infertility coach. Infertility coach? What was that? I was vaguely familiar with life coaches but also thought that was for people who lacked motivation or purpose in life. I remember walking up to Pradeepa with my husband and another couple. She asked us about our infertility journeys. Fighting back tears, I told an abbreviated version of my story. She told me hers. She also knew what it was like to experience a miscarriage after going through infertility. I gave her my email and continued to the conference. As we walked away, my husband said, you should really talk to someone like her.

Back in Ohio, I got a follow up email from Pradeepa asking me if I wanted to try a coaching session. Sure. I knew I was having a difficult time and the thought of going back to IVF was still too overwhelming. I felt a little uncomfortable, I was sharing things no on else knew with someone I had only met once. I cried. A lot. But it was more of a refreshing cry. We talked about the emptiness I was feeling after losing my baby. We talked about the ”black hole” with no exit I was feeling like I was in. At the end I felt a little better.  Not normal by any means, but better.

We decided to talk again in a couple weeks and I had some “homework.” She coached me about a lot of different issues I was experiencing like the sudden death of my father 5 years prior and a lot of unresolved feelings towards him. She helped me see clearly the relationship with my husband and how we were each grieving differently. She coached me through the strained relationship with my mother in law since the news of Lily having Down Syndrome. She coached me on how to handle conversations or hurtful pieces of “advice” people would give. And I continued to cry a lot during each session. It was liberating each time. She always gave me homework to try at the end of each session which really helped me put those actions to practice. Slowly, I started seeing a positive shift in my mindset and behaviors.

As we got closer to doing another egg retrieval, I worked with Pradeepa a lot with dealing with guilt. I felt like I was doing some kind of disservice to Lily by trying to get pregnant again. We worked through this, but guilt continued to be present for quite some time and was often a topic I received coaching for for months to come. I felt better going into my third egg retrieval, still not where I wanted to be physically or emotionally, but certainly better than prior to starting coaching. Our third retrieval was again disappointing. Our embryo was a complex mosaicism after PGS testing, meaning there were multiple possible chromosomal problems and not recommended for transfer.

I continued with coaching since I knew more treatments were to follow, more testing of my emotional stability and balance. We continued to work through the disappointment and fear of moving into a new cycle. I also worried that something was wrong with me and maybe I couldn’t have my own child who was genetically tied to me. We talked about that too. Pradeepa helped me create a plan for times when my mind would begin to wander into some deep, dark unknown that I could not control. Egg retrieval number four had our best results to date and we ended up with seven embryos for PGS testing. Although I was very excited for the results, I worried that maybe only one or none would be normal. Pradeepa and I worked through that.  We ended up with five normal embryos and Pradeepa encouraged me to celebrate. We transferred our best embryo the next month. Then came the dreaded two week wait.  We also worked through that with other activities to do to distract myself from analyzing every twinge in my body. She challenged me to stay away from Google.

In mid 2018, I found out I was pregnant with my rainbow baby. As much joy and elation I had, there were equal parts of anxiety, fear, and dread of another miscarriage. Although I had been in a great headspace prior to our transfer with coaching, exercising and acupuncture, I suddenly felt like I had taken 10 giant steps backwards. I talked to Pradeepa about that. We again discussed the guilt of loving this baby when I had another baby in my heart. I continued coaching throughout my pregnancy. I tried to stop at one point but when we talked about a month later, I knew my mind had again started to go backwards. Every now and then we would talk about the progress I had made, and I was reminded of how far I had come. My big black hole had gone from total darkness with no escape, to a trickle of light from the top, to a gaping area of light flooding the hole, to an exit and eventually out into the sunshine again.

Meeting Pradeepa in Minneapolis and starting coaching was exactly what I needed. I don’t think I would have been in a good place to continue on with fertility treatments the way I was. I knew I needed to do some serious work to heal my heart and make me ready for a new pregnancy. Did coaching get me pregnant? No. But it helped me become a better person in more aspects of my life than just infertility and it helped prepare me for being the best mother I could be for both my angel baby and my rainbow baby.

My Fertility Journey: A Rebel with a Cause

How my Infertility Journey made me a Passionate Listener!

Claiming my Niche- “The Infertility Coach”