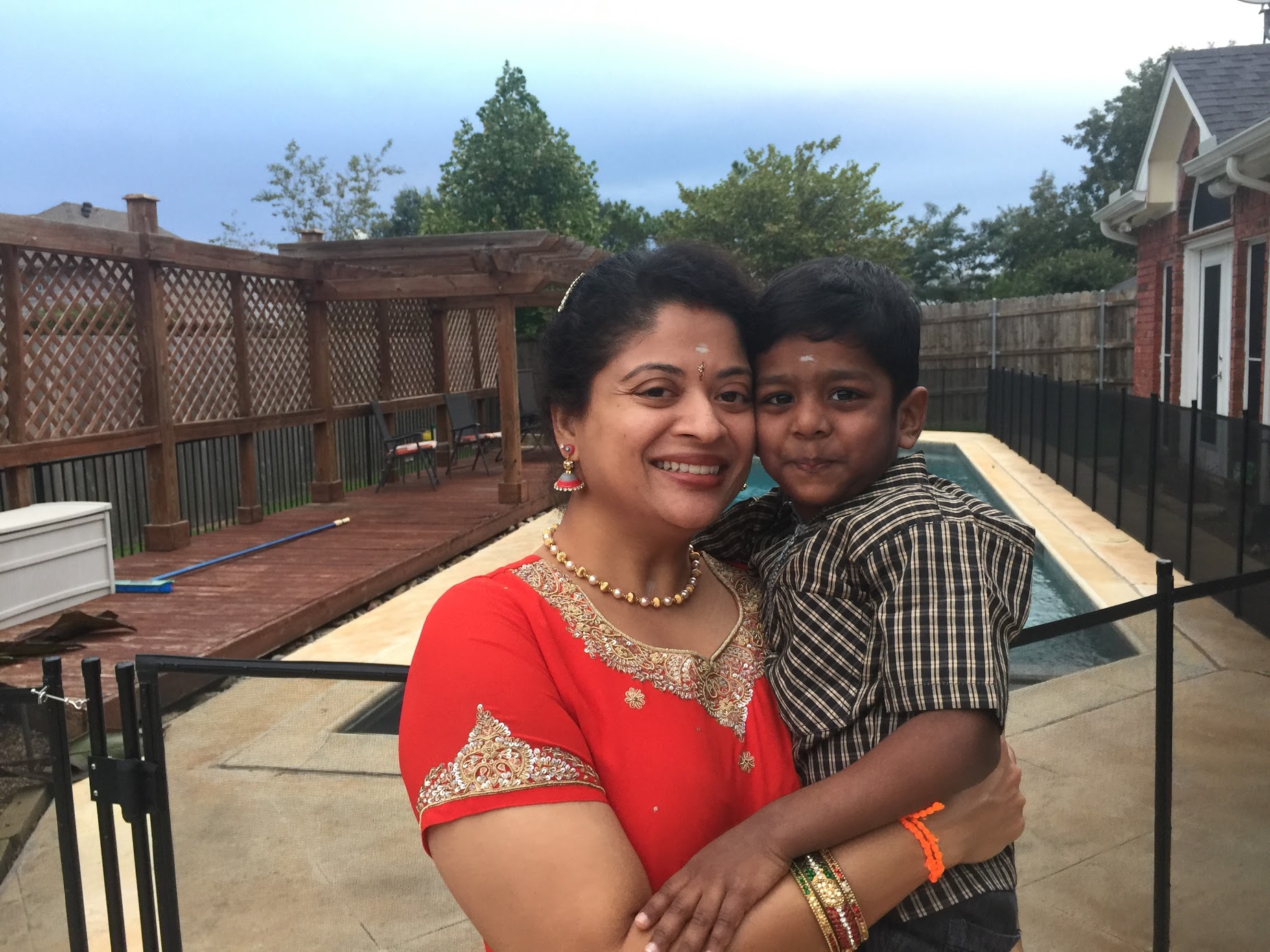 Pradeepa Narayanaswamy, of Dallas, Texas, has been a corporate leadership coach for many years, helping employees and companies overcome obstacles to growth. Yet she faced her own tough challenge—trying to build her family—without much guidance, keeping her own counsel through the almost 13 years that she and her husband were on this path.

They dealt with devastating losses with natural childbirth, the seemingly endless tunnel of infertility procedures, and finally the patience game of adoption. She persevered. She also realized that people like her dealing with infertility need support, too, to have their journey honored. She is now also a fertility coach. Here is her story.

It was a hot summer day in Dallas. We were all packed for our trip to India. Even though my husband and I are originally from India and I have traveled there a dozen times since I moved to the United States, this time it felt different. I was both excited and nervous. We were traveling to meet Kartik, for the first time.

We would be meeting our son!

We got him new clothes, my husband bought him a yellow racing car, we got him Ninja Turtles sandals, and we brought a couple of bags of chocolates to give to Kartik and the other kids at the ashram (orphanage) in Mumbai. This was becoming more real now. I did not know what to expect.

We got to the airport and boarded our first flight from Dallas to Dubai. As the flight was taking off, I held my husband’s hands and told him, “This is it!” He gently patted my hands and nodded.

As I watched the clouds and bright sky outside my window, I started drifting into the memories of how we had gotten to this point.

I remembered my first pregnancy. It had taken a while for us to get pregnant, but it happened. I was so over the moon. We informed a few family members and friends about the pregnancy. Nine weeks in, I felt a sharp pain in my uterus one night. I couldn’t sleep the rest of the night. I met with my OBGYN that morning and an ultrasound revealed that there was no heartbeat and I would miscarry. I was completely shattered. I really couldn’t believe that it happened. I grieved for a long time.

Within a few months, I got pregnant again, only to lose the baby again.

And it happened a third time. I cried a lot. I didn’t share the news about my second and third pregnancies or losses with anyone. I grieved and struggled in silence. I was angry at God.

After this, I was referred to a fertility specialist. We needed to try something new. We tried fertility drugs, then did three rounds of IUI. No luck. It became clear soon after that it was time for IVF. At this point, I felt hope again and I really thought: This is it.

Despite all of the discipline needed, the medications, timed injections, and doctor appointments, I did it all with anticipation and hope. After the implantation, I couldn’t wait for the day to give my blood to confirm that we were pregnant!

That morning I was the first one in when the clinic opened, then later waited for the doctor’s call with near-manic anticipation. I got the voicemail from the doctor: “Hello Pradeepa. I am very sorry…”

I couldn’t bear the news and tears started flowing uncontrollably. I was in the hallway at work. I quickly rushed to my desk, grabbed my bags, and rushed out.

I was devastated. If this didn’t work, what were my chances?

It took a while for me to recover from that, but we tried a second time, which became a third then…an eighth, including three rounds of donor cycles and working with four different doctors.

We couldn’t see into the tunnel, but still we kept moving forward. Sometimes we would crash and I would have to pick up my broken pieces and keep moving. I was exhausted physically, mentally, emotionally, and spiritually. Infertility tested me like nothing else. I was angry, sad, desperate, ashamed, frustrated, nervous. I felt so lonely.

Support groups felt like pity parties. I was pathetic.

I avoided going to India to see my family for four years, making up reasons why I couldn’t go. I wanted to avoid the tough questions. I also hated when my friends or family members announced their pregnancies. I was jealous. Why not me?

My relationship and intimacy with my husband were at an all-time low and we were on a downward spiral. We lived on our own islands, not wanting to talk about our infertility reality and our feelings associated with that reality. We didn’t know how to support each other. We were drifting apart.

I will never forget the cold November evening I sat in my car for three hours not wanting to go inside my home as it reminded me of my hopelessness with infertility.

At home, my coping mechanism was to go numb with Netflix. At work, I wore a mask pretending everything was fine in my life. I was ashamed of what I saw as my failures.

After the eighth IVF attempt—eight years after my husband and I first began trying to have a child— I had had enough. My husband and I decided to try adoption.

But even well into the adoption process, I couldn’t find closure. It took almost three years for me to make peace with my infertility. One day I had a sudden realization that for years I had felt like a victim of infertility. The thought was like an electric jolt through my body.  I knew I couldn’t hold on to that feeling of being a victim and move forward. I had to let it go.

It took two more years before we were matched with Kartik and able to bring him home.

Now, here, on the airplane, as I was brought back to the present, I realized that I was crying.  Wiping my tears, I thought: “Wow. What a journey!”

The adoption coordinator at the ashram called him and said, “Yeh he tumara mummy papa.” (“This is your mom and dad.”)  I’ll never forget those words.

We landed in Mumbai with excitement, but it was Indian Independence Day and the ashram was closed to visitors. The next day we were joined by our parents and siblings and made our way there.

We arrived, sat in the waiting area, and a helper went to bring Kartik. When he came, Kartik, who was just shy of four years old, was hiding behind the helper. The adoption coordinator at the ashram called him and said, “Yeh he tumara mummy papa.” (“This is your mom and dad.”)

Kartik took a peek at us then he came to me and sat on my lap. I started crying immediately.

This was it! I was finally a MOM!

At that moment, all of the journey and our struggles seemed to wash away, and I felt alive for the first time in a really long time.

It took a little while longer for Kartik and my husband to bond. Kartik was very shy around men. It was understandable as Kartik had spent his whole young life surrounded by women in the ashram orphanage. (Now they are best buddies.)

Our Son, Our Light

We stayed a few weeks in India to arrange for Kartik’s visa and spend time with our families, but then we had to come home.

On the flight back home to Dallas, I was excited and nervous—again. What will happen next? Will we bond? Will Kartik be happy?

I saw Kartik looking at me with his new car in his hands, wanting to play with me. I forgot everything, took him in my arms, and gave him a big kiss.

I never knew what to expect, but I had to go with my instinct.

That’s how it has been for the past two years since we brought Kartik home. Though we have good days and bad days and I will never be a perfect mom, every day is an adventure—and that’s what makes our lives more interesting.

When I kiss Kartik goodnight, his arms hug me tightly as he gives me a big, juicy kiss. It makes everything I went through—almost 13 years of trying to build a family—worth it. My son, Kartik, is my light at the end of the tunnel.

A Rejection that Wasn’t Okay!

How my Infertility Journey made me a Passionate Listener!